I have sailed the world,
beheld its wonders
from the Dardanelles,
to the mountains of Peru,
But there's no place like London!

For those of you who enjoy musicals, those are the lines from the first song in the movie Sweeny Todd. The song continues to really bash the city of London, England.

Personally I have recently been stationed to London, Ontario. It has been an interesting first week! I have done some exploring, bicycling around the city and looking for...well... something to find. My favourite things to find are the forgotten places. I suppose that fits well with the title of my blog. 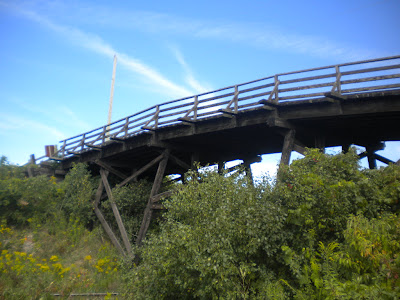 While traveling along a major road, I noticed a dirt road that led to this lovely old bridge that spanned over the railroad tracks.
Note: if I had taken this photo from a higher vantage you would be able to see a multitude of siamese-twin roofs that are the hallmark of suburbia

Ignoring the signs warning about the dangers of crossing, I walked across the ancient bridge and saw the dirt road led to an old house that had been boarded up. Across the driveway was the remains of a barn that had been burned to the ground. Only one wall remained standing and behind this was a cacophony of old hay and blackened wooden struts. This wall was white, and adorned with sharpie quotations left by some rogue poet. 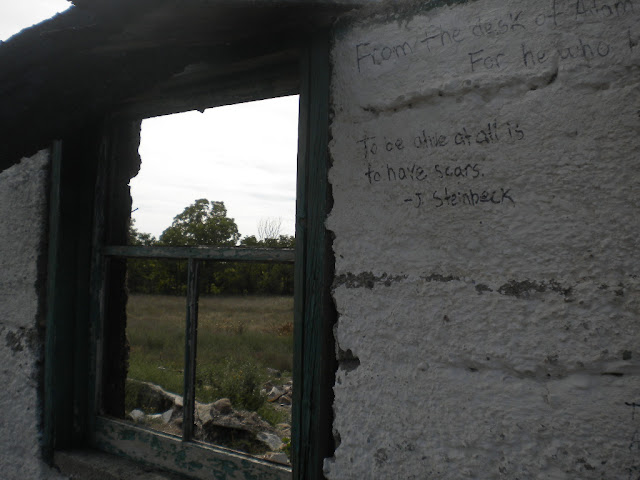 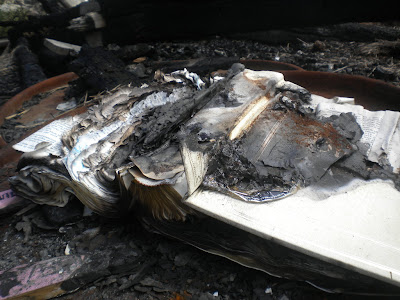 I climbed down into the jumble of burnt lumber and litter and looked around.

Perhaps most people would see trash, but I always find treasure. On a lid from a large metal drum I noticed a burned book. Upon closer inspection, I found it was Holy Bible.

At random, I chose one page and pocketed it. I read it later, when I was less creeped out, and some interesting quotes jumped out at me. I am not a religious person, but I you will never hear me say that there is no benefit to theology.

24 Make no friendship with an angry man; and with a furious man thou shalt not go:
25 Lest thou learn his ways, and get a snare to thy soul.
12 Apply thine heart unto instruction, and thine ears to the words of knowledge.

However, I will draw the line when it comes to quotes like this following one, it just gives me the creeps.
17 Let not thine heart envy sinners:but be thou in the fear of the LORD all the day long.

(When I Googled these quotes I found that they come from the King James version,
and that these are proverbs, if you care to know.) 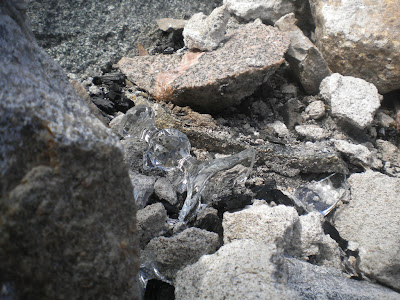 I also found some smashed crystal-ware, and I photographed it because I loved the contrast of fine crafted beauty smashed against the rocks. 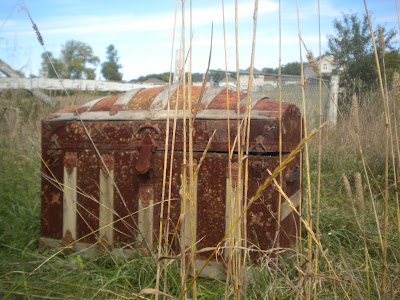 My favourite item to be found near this husk of a barn was a very rusted treasure chest. Or a trunk? Whichever you want to call it, depending on your imagination. At the bottom of the chest was a dark blue crushed velvet dress, thrown in a heap of disarray.

It had a fine fake silver clasp below the breasts and the neckline was adorned with silver beadwork, which was haphazard now and tearing apart. It looked more like moth-eaten, cheap costume apparel than a lady's dress.  I dropped it back to it's hiding place when a small spider crept onto my hand. (Bleck!)

Still shaking my hand, I left the property and bicycled back over the bridge. As I went over it, a train with many cars and tankers sped below me. Once they had passed, I couldn't resist the temptation to go check out the tracks, and also to snap a cliche photo of myself. 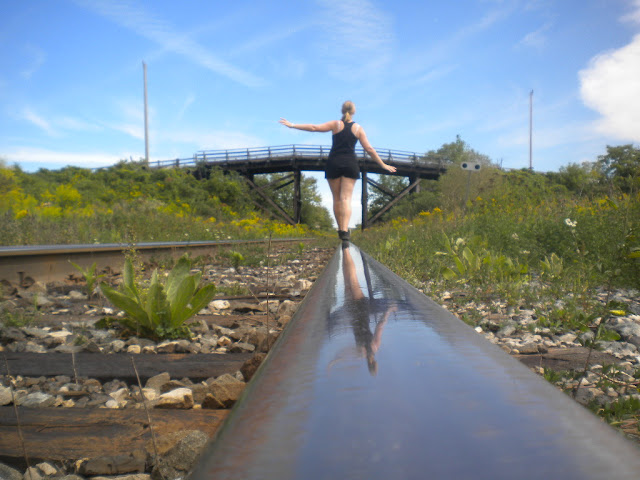 More to come! I have some more photos and I plan to continue exploring
London's secret places in hiding over the next few months. Cheerio!
Posted by Decimetria at 18:11